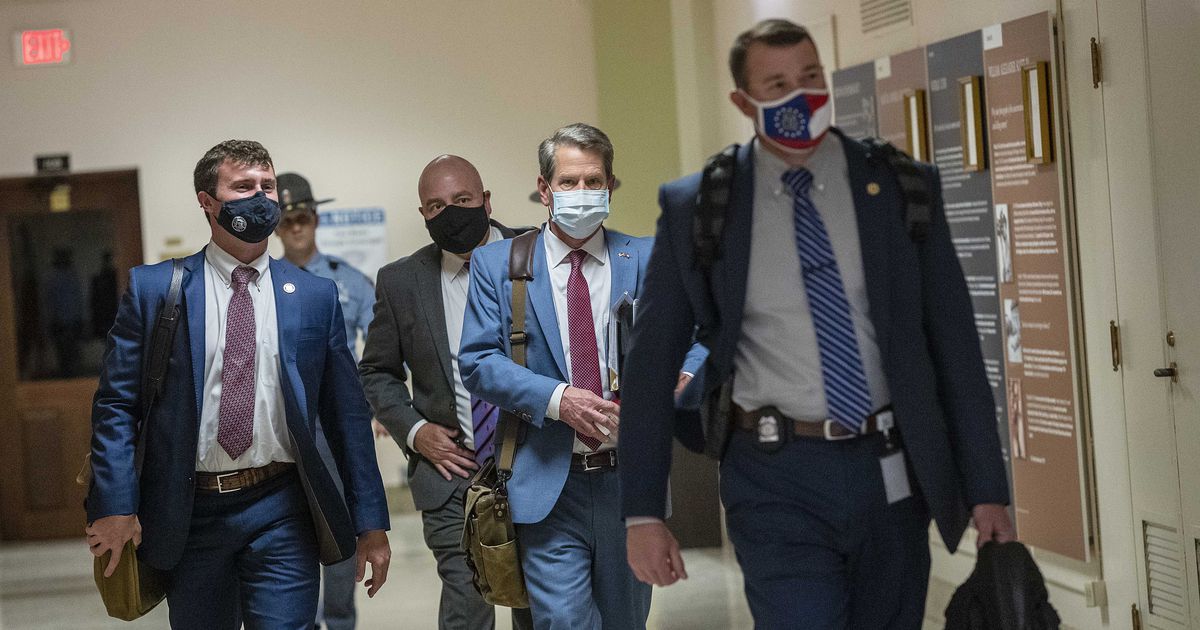 The outcomes of Georgia elections could hinge on the many ways voter behavior changes in response to the laws, say voting rights groups and election experts. Each new obstacle has the potential to stop voters — a record 5 million of them in the presidential election — from participating in democracy.

“It’s always going to have an impact. The question is whether we’re going to be able to overcome that impact,” said Cliff Albright, executive director for Black Voters Matter. “We won recent elections not because there wasn’t voter suppression, but because we were able to out-organize it.”

Republican Gov. Brian Kemp signed Senate Bill 202 into law on Thursday, the same day it passed both the state House and Senate.

Motivated in part by unfounded suspicions about last year’s elections results, the 98-page bill changes election procedures following Republican losses in races for president and the U.S. Senate. Election officials have said repeatedly there’s no evidence of widespread fraud in those contests, and election laws were written by the state’s Republican majority.

The biggest turnout — and longest lines — are often in highly populated areas with large numbers of Black voters. During Georgia’s chaotic primary in June, Black voters were more likely to be stuck waiting for hours, according to election data. Without weekend voting before runoffs, Black voters won’t be able to participate in “Souls to the Polls” group voting events after Sunday church services.

Conservative voting organizations and legislators said the law was necessary to restore voter confidence that was shaken by unsupported allegations from Trump and his allies of thousands of illegal votes.

ExploreKey details of the election bill approved Thurday in Georgia

After the number of Georgians casting absentee ballots surged during the coronavirus pandemic, especially among Democratic Party voters as Trump discouraged their use, state law will make remote voting more difficult.

Voters who lack a driver’s license or state ID, estimated at over 200,000 registered Georgia voters, will have to submit other paperwork proving their identity when requesting an absentee ballot.

It will also be harder to return their ballots to ballot drop boxes.

The boxes were used for the first time in 2020 under emergency rules approved by the State Election Board during the coronavirus pandemic. SB 202 allows counties to use the boxes in future elections, but it prohibits the kind of widespread deployment used during the pandemic.

The law says boxes can only be placed inside early voting locations and can be accessible only during regular voting hours — not 24 hours a day, as they were in recent elections. And they can’t be deployed in the four days before the election.

Supporters of the law say it will ensure the boxes are kept secure, within the watchful eyes of poll workers. There was no indication of ballot-stuffing at Georgia drop boxes, which were monitored by video.

“These safeguards will not stop anyone from casting a ballot, but they will help to renew voters’ trust and confidence in our election system,” said Jason Snead, executive director of the Honest Elections Project, an organization that advocates for stricter voting security laws.

Some local election officials say the new law renders the boxes practically useless by prohibiting counties from deploying enough to meet demand, making it a hassle to use them.

Smaller counties also will be affected. Bartow County had five drop boxes in November, but it can deploy only one under the new law.

Election Supervisor Joseph Kirk wonders how he’s “supposed to pick which out of our four (early voting) locations deserves to have it.”

The law also narrows the window for applying for an absentee ballot.

Lawmakers who backed the deadline say it will make it more likely that ballots are requested and returned in time to be counted.

Several local election officials said they like the idea of an earlier deadline for requesting ballots.

“This will allow us to be able to get the ballots to the voters in a timely manner to ensure that they can get it back to us on time,” said Deidre Holden, elections supervisor in Paulding County.

Still, some thought 11 days before an election was too early for the deadline.

Heard County Election Supervisor Tonnie Adams said eight days would be better — giving voters an extra weekend to request a ballot. And he wanted more exceptions for emergency situations — such as people who are called out of town at the last minute or who are ill but not hospitalized.

“They can’t get an absentee ballot that last week if you change that deadline,” Adams said.

After polls close on election night, results must come in faster.

Georgia’s voting laws now require election officials to keep counting ballots until they’re done, even if they have to work overnight or in shifts for days at a time. The law also mandates that counties certify elections within six days, a tighter deadline than the 10 days previously allowed.

Backers of the provision say it would ensure voters get results in a timely fashion.

During Thursday’s debate in the Capitol, Sen. John Albers, a Republican from Roswell, said Florida — which has twice the population of Georgia — was able to complete most of its counting on election night.

Some election directors say continuous counting is doable, in part because the law allows counties to begin processing absentee ballots up to two weeks before election day (something that was done on an emergency basis during the pandemic).

Others said the requirement isn’t needed and could lead exhausted election workers to make mistakes.

“Unless you are paying for multiple shifts of individuals, you are simply increasing the likelihood of errors,” said Dele Lowman Smith, a member of the DeKalb County Board of Registration and Elections. “Nobody can function that way. We’re not robots.”

One part of the law increases voting access to residents in counties that don’t offer more than one weekend day of early voting before general elections.

The legislation mandates that early voting be available on both Saturdays of the state’s three-week early voting period, and it allows counties the option to offer early voting on two Sundays as well. Many metro counties already provided multiple weekend days, but the bill will expand voting hours for residents in more rural, Republican-leaning counties.

The law also preserved absentee voting for any voter, discarding a proposal to limit absentee ballots to voters who are at least 65 years old, have a physical disability or are out of town.

Despite the rhetoric of Democrats and civil rights groups, Massachusetts Institute of Technology professor Charles Stewart said most of the law’s provisions are “fairly mild as these sorts of changes go.” And he said Georgia election laws won’t be outside the norm, especially compared with other Southern states.

“There may be some slight inconvenience to voters,” Stewart said. “But they don’t seem to be so insurmountable that they would throw elections one way or another in the future.”

But when viewed as a package, the bill’s voting restrictions could deter thousands of people from voting in future elections, University of Georgia political scientist Charles Bullock said.

Perhaps the changes could even overcome the kind of 11,779-vote deficit that cost Trump the election here in November.

“Would this impact 12,000 people out of 5 million (voting) people?” Bullock said. “The various provisions might.”

What’s more, both experts said SB 202 could backfire on Republicans by inspiring higher turnout among angry Democrats and Black Georgians. Stewart said Democrats in 2020 effectively used lingering anger over the 2018 election — when many believed then-Secretary of State Brian Kemp used his office to gain an advantage in the governor’s race — to motivate voters.

“As someone who works every day to figure out how to encourage people to participate in our elections, it doesn’t take a lot for new voters, young voters and people working two jobs to decide it’s not worth it to vote,” said Nse Ufot, CEO for the New Georgia Project, a voter registration organization. “It’s backlash for Georgia electing its first Jewish and first Black senators,” U.S. Sens. Jon Ossoff and Raphael Warnock, respectively.

Stewart said SB 202 probably won’t even succeed in its key aim — to increase public confidence in elections. He said extensive research has shown election law changes have little effect on voter confidence. Instead, confidence is based on people’s personal voting experience and whether their preferred candidate wins.

In Georgia, surveys show it’s Republican voters who lack confidence in elections after Democrats won the presidential race and both U.S. Senate races.

“If Raphael Warnock wins and Stacey Abrams wins in 2022, I don’t think Republicans will say ‘it was a level playing field, so let bygones be bygones,’ ” Stewart said. “Ain’t gonna happen.”

The latest: Voting rights groups filed a federal lawsuit to try to stop the law from going into effect, and campaigns are preparing for new election rules in the 2022 state elections.

What’s next: Candidates, courts and Congress might take action in response to the law as they focus on voting rights and election integrity.

EU and USA congratulate Georgia on the 100th anniversary of the...

Regulation enforcement businesses in Georgia are getting ready for the trial...