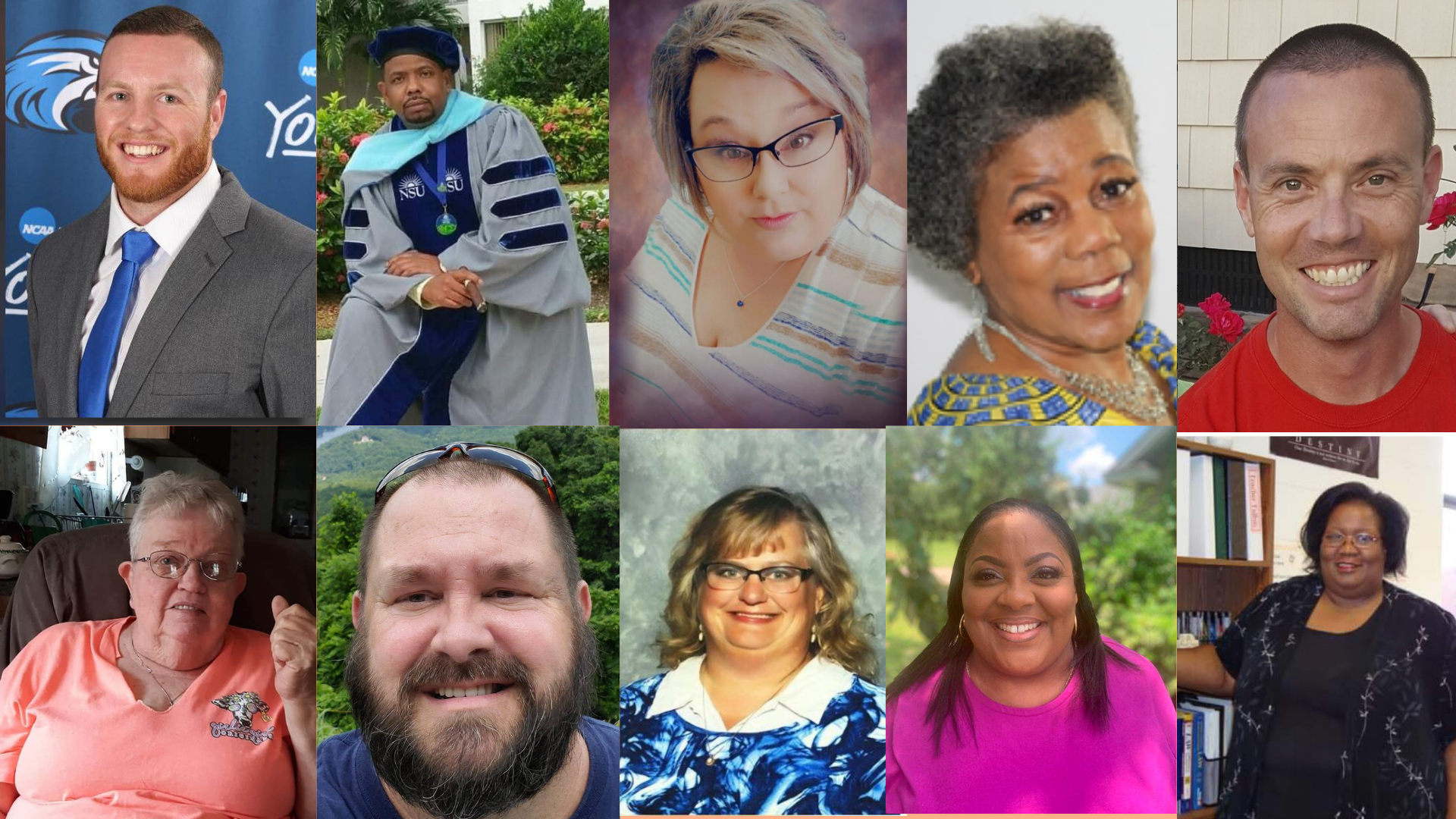 ATLANTA – More than two dozen teachers and staff in Georgia have died of COVID-19 since the school year began in July, Channel 2 Action News has confirmed.

The youngest was just 24 years old.

Channel 2 Action News was only able to confirm that two of the teachers and staff were vaccinated, while others may have been vaccinated. In many cases, their families begged people to receive the vaccine after their loved ones died.

All in all, the following list paints a stunning portrait of the tragic toll that the Delta variant of COVID-19 has taken on educators across the state. Here are their names and stories:

Leah Ann Tinsley, 64, died of COVID-19 on September 11, according to her son. She was an accountant with the Board of Education and had worked at Rutland Middle School. She leaves behind a son and a grandson.

Rodney Lee, 44, died on September 6 after a battle with COVID-19, the Dalton Daily-Citizen reported. The father of three was a physical education teacher at Varnell Elementary School in Dalton for 18 years. He was very active in his church where he served as a deacon for nine years. His wife, Lacey Lee, said he loved young people. The family was not vaccinated, but Lacey Lee told the newspaper she was glad that her husband’s story inspired some people to get their vaccinations.

Bobby Leverette, 75, died of COVID-19 on September 5, the Associated Press confirmed. He was one of three bus workers who died from the virus that same week. He was the grandfather of two children and a bus driver for the Griffin-Spalding School District. He was a Vietnam War veteran and was retired from Piedmont Airlines / US Airways.

Jamie Morris, 40, died of COVID-19 on September 4, according to his wife. He was a 7th grade teacher at Pierce County Middle School and the father of three children. He also coached middle school soccer and football.

Angela Sistrunk, 62, died of COVID-19 in Savannah on September 4, according to WSAV.com. She was a longtime science teacher in 6th grade at DeRenne Middle School who was retired but came back to teach this year. She had been vaccinated but had previous health conditions, WSAV.com reported.

Frankie Guitierrez, 46, died on September 2 after battling COVID-19. He was a school resource officer at Welch Elementary in Coweta County. He had four children, including a newborn, and took the job so he could spend more time with his family.

Scarlet Driggers, 60, died of COVID-19 on September 2, according to her family. She had been a nutritional counselor in the Bulloch County school system for over 20 years. Most recently she was the canteen manager at Portal Elementary School. She was a mother of four children.

Ryan Dupree, 24, died of COVID-19 on September 6, just one day after testing positive. Dupree was the new assistant basketball coach at Shorter University in Rome.

Kristi Crawford, 49, died on August 27 after a week long battle with COVID-19, reports WTVM.com. She was a teacher at JD Davis Elementary School in Columbus for over 20 years. She leaves four daughters.

Dr. Michael Lewis, 42, died of COVID-19 in Bainbridge on September 1, shared on social media by numerous friends and coworkers. He was an award-winning teacher, writer, coach, and associate professor in Bainbridge, Georgia. Lewis, who earned a double doctorate from Nova Southeastern University, most recently taught at Bainbridge Middle School and Southern Regional Technical College. He also taught local prisoners who wanted to earn their GEDs. Lewis also wrote a children’s book, was a founding member of the Iota Phi Theta Fraternity at Valdosta State University, and an active member of the Georgia Association of Educators.

Sean Hammond, 51, died on Aug. 30 after testing positive for COVID-19 just days after the start of the school year. Hammond was a soccer coach at Hammond Creek Middle School in Dalton. Hamond tested positive three days after pre-planning and introducing new teachers. However, school officials said he was never able to start the school year with students in the classroom. His wife was also hospitalized with the virus. He leaves behind a young son.

Penny Gary, 58, died of COVID-19 on August 29, reports WJCL.com. She was a social studies teacher at Statesboro High School in Bulloch County and had taught in the district for 17 years. She leaves behind her son and several grandchildren.

Natalia D’Angelo, 43, died of COVID-19 on August 28. She was a special school bus driver in the Griffin-Spalding school district. Her bus observer Marie Darley also died from the virus. A wreath was hung on their bus, # 07-14.

Chris Bachelor, 42, died on August 25 after a month of battling COVID-19. He was a school resource officer at CW Davis Middle School in Hall County. He leaves behind his wife and an 11-year-old daughter.

Rachael Akridge, 41, died of COVID-19 on August 21, her family confirmed on GoFundMe. She was an administrative assistant at the Transitions Learning Center in Statesboro. Her 26-year-old stepson Jimmy Adkins also died of the virus just four days before Akridge’s death.

Rashida Kimmons, 40, died of COVID-19 on August 19. She taught at the SL Mason Primary School in Valdosta. “One of the last things she asked me was, ‘Who has my children?’ She did everything when it came to her children in school, she treated those children in school and in class as if they were her own. There was nothing she wouldn’t do for her children, “her husband Adolphus Kimmons told WALB-TV.

Marie Darley, 75, died of COVID-19 on August 19. She was a special school bus observer with the Griffin-Spalding School District. The driver of their bus, D’Angelo, also died. Darley was a grandmother at 12 and great-grandmother at 14.

Brian Mainor, 51, died of COVID-19 on August 18. He was a teacher at the Hahira Elementary School in Valdosta. He was the second teacher in the county to die in just 24 hours. Rashida Kimmons died on August 19th.

Shirley Duggan, 77, died of COVID-19 on August 15, according to the Brantley County School District. She was a school bus driver in Brantley County for about 20 years. She loved going to church and spending time with her five sons, eleven grandchildren, and several great-grandchildren.

Walter Kearse IV, 36, died on August 13, despite being fully vaccinated. He was a teacher and graduation coach at Luella Middle School in Locust Grove.

Betty Hutcheson, 59, died of COVID-19 on August 11, according to her brother. She was an early childhood education teacher at Twin City Elementary School in Emmanuel County. She was supposed to be teaching math this year. She was a mother of two and loved reading, singing, and going to church.

Catherine Shuman, 38, also died on August 11 after a battle with COVID-19, according to her family. She was a science and social studies teacher at Wacona Elem in Waycross. She also coached the Wacona Science Olympiad team. “She will be remembered as an enthusiastic team player who made science learning fun for her students,” said family members in their obituary.

Sandra Ingram, 45, died of COVID-19 on August 1, her sister-in-law said on social media. Ingram was a preschool teacher at Goddard School in Midtown Atlanta and a mother of five children, the youngest of whom is only one and a half years old. Family members said she was not vaccinated and begged people to get her vaccinations.

Deborah Daniels, 66, died of COVID-19 on July 31, according to Johnson City Wire. She was a school bus driver for the Savannah-Chatham County School District. She was also the Union Steward for the local Teamters branch. Even while battling the virus in the hospital, she was on Zoom calls with her union trying to help other bus drivers navigate the pandemic safely.

IN THE COURT OF COURT OF GWINNETT COUNTY STATE OF GEORGIA...

The Georgia sheriff’s workplace mourns the demise of an MP

Chris West is a Republican operating for Congress in Georgia’s 2nd...