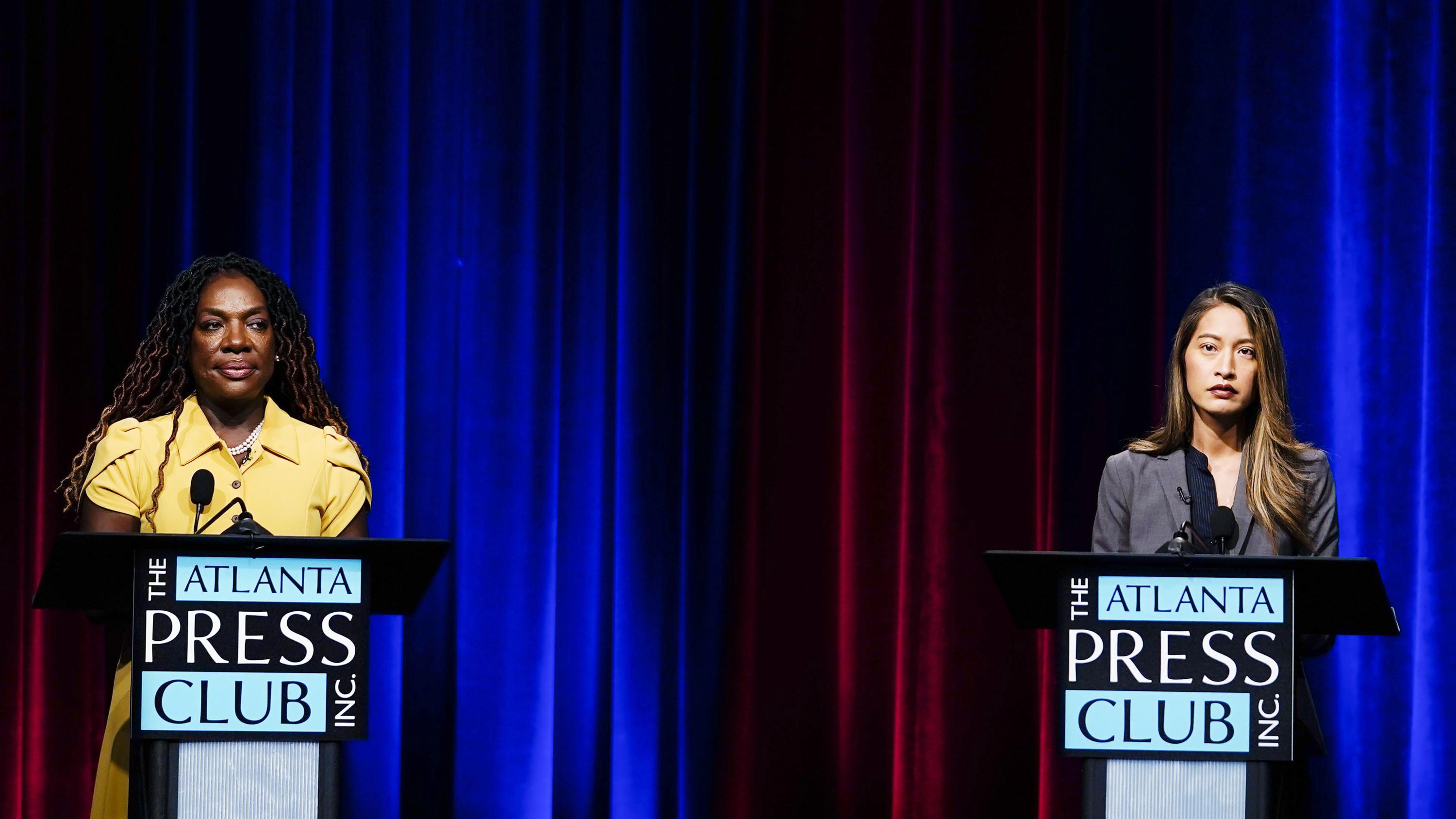 ATLANTA (AP) — Democrats are settling several statewide races and congressional primary on Tuesday, including three races in which Stacey Abrams has endorsed other members of her party she wants on the ticket while running for governor. There are three Republican congressional samples, including two in heavily Republican districts. Two Democratic congressional runoffs show a frontrunner who lost to a Republican in 2020 but wants another chance. Finally, there are 11 state runoffs, including one Republican incumbent and one Democratic incumbent in the House of Representatives, that failed to win majorities in the May 24 primary.

Here’s a look at the races:

Rep. Bee Nguyen and former Rep. Dee Dawkins-Haigler are vying for a chance to challenge incumbent Republican Secretary of State Brad Raffensperger in the fall. Former President Donald Trump has targeted Raffensperger for failing to reverse his narrow loss in the state. Raffensperger beat a Trump-backed main challenger without being forced into a runoff.

The once-sleepy office was thrust into the limelight when Trump began peddling unsubstantiated claims of widespread voter fraud.

Kwanza Hall, a former member of the Atlanta City Council, led all candidates in the May 24 primary, despite a low-profile, low-money campaign. Runner-up Charlie Bailey, who was the 2018 Democratic nominee for attorney general, is trying to overtake Hall, backed by Democratic leaders like Abrams.

The winner faces Republican Senator Burt Jones, who triumphed in the May 24 primary after being endorsed by Trump.

Bailey had run for attorney general again, but was running for lieutenant governor. Bailey has promised to work with Abrams to cover uninsured adults, improve education and increase public safety. Bailey attacked Hall over money Hall received from the city of Atlanta after he resigned from the city council. Despite a city ban on hiring former officers for a year, Hall says he did nothing wrong.

Hall also served the final month of the late John Lewis’s term in Congress and enjoys a high profile. He argues his time on the city council prepared him to work with Republicans. Hall has focused on economic empowerment, urging the state to allocate 30% of its contracts to minority- and women-owned businesses. Hall said he wants to legalize marijuana and direct the resulting business opportunities to minority communities.

State Rep. William Boddie Jr. and entrepreneur Nicole Horn have both focused on overhauling the state’s Labor Department, which has been plagued by grievances as Georgia’s unemployment rate hit a record amid the COVID-19 pandemic.

Incumbent Republican Mark Butler is not seeking re-election, and the GOP has nominated state Senator Bruce Thompson of White.

Both Boddie and Horn agreed that the department needs more money to hire more staff so that jobless claimants can get answers to questions. Boddie said his experience in legislation will help him persuade lawmakers to give the department more money. Horn said her business experience would allow her to be an effective manager.

Laws Robinson has said she would target Georgia’s high auto insurance costs by changing state laws to make it easier for the commissioner to block rate increases before they go into effect. She said she would also take action against insurers who take advantage of policyholders through unfair underwriting practices.

In the 6th Ward in Atlanta’s northern suburbs, paramedic Rich McCormick tries to stop Trump-backed attorney Jake Evans, each accusing the other of not being conservative enough.

The 6th and 10th are both heavily Republican districts.

In the 1st District on the Georgia coast, Joyce Marie Griggs is relying on a grassroots approach to convince Democrats to re-elect her to challenge Republican US Rep. Buddy Carter. Griggs, a disfellowshipped attorney, lost to Carter in 2020. Attorney Wade Herring has surpassed Griggs and told Democrats he had a better chance of winning the seat

In the 10th District, Tabitha Johnson-Green is trying to become the Democratic nominee for the third straight cycle after losing to outgoing incumbent Jody Hice in 2018 and 2020. Athens real estate agent and musician Jessica Fore is attempting to overtake Johnson. Green.

With one seat in the Senate and 10 seats in the House of Representatives, party nominations are decided.

Banker Mike Hodges and former House Representative Jeff Jones will be fighting for the Republican nomination in Senate District 3 on the Georgia coast, covering all of Brantley, Camden, Charlton, Glynn and McIntosh counties and part of Ware County.

Among six Republican and four Democratic State House contests are two incumbents who failed to win a majority on May 24 and must win Tuesday’s runoff to maintain their chances of re-election. Incumbent Republican Sheri Gilligan, an occasional critic of House Speaker David Ralston, is opposed by Carter Barrett in House District 24 in southwest Forsyth County. Democratic incumbent Roger Bruce is viing with Rashaun Kemp in House District 61 in South Fulton and Northeast Douglas counties.

Efforts by the GOP to limit racial training in Georgia faculties...