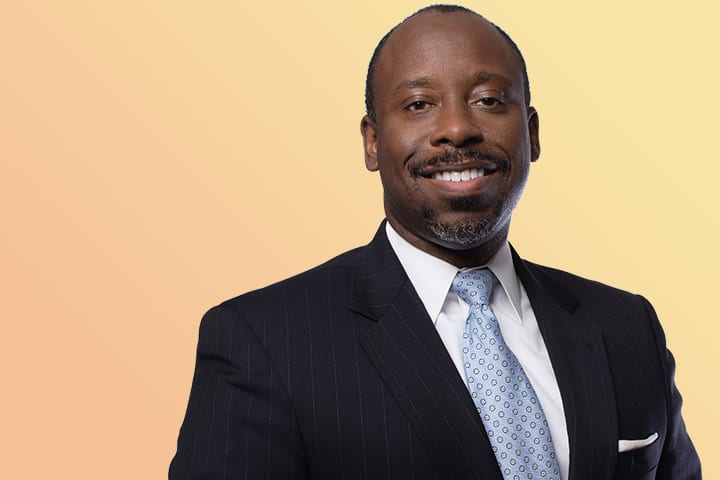 Every summer dozens of beaming teenagers from the Atlanta metropolitan area come to Georgia State Law for Justice Robert Benham Law Camp. It’s one of Harold Franklin’s favorite seasons (JD ’99). During his tenure as president of the Gate City Bar Association, Harold founded the camp – named after his friend and mentor, retired Georgia Supreme Court Justice Robert Benham, who became the first African American to be appointed to the Georgia Supreme Court in 1989.

This summer, COVID-19 nearly thwarted their plans for the first time in 14 years, but they stormed ahead and kept camp online to cater to more students than ever before.

A number of students who attended the camp have graduated from the College of Law. It is Franklin’s way of giving back as so many people have given him.

“As an aspiring attorney, it’s so important to have people who are invested in you and enable you to be vulnerable enough to ask stupid questions,” Franklin said. “I’m trying to be the mentor I would have liked.”

Franklin spent his early years in southwest Atlanta before the family moved to Smyrna, Ga. His father was a math professor and his mother a teacher who became an accomplished entrepreneur. He earned his bachelor’s degree in economics with a minor in Spanish from Emory University and after graduation worked as an insurance broker for six years before enrolling in Georgia State Law. Another mentor, Professor Anne Emmanuel, had volunteered with his mother and she encouraged him to apply to the College of Law.

Franklin in 2016 with students in the 10th annual Justice Benham Law Camp.

He knew he wanted to be a trial attorney and immediately entered mock trial and appeal competitions. He remembers how he enjoyed traveling to national competitions and learning from Professors Ellen Podgor and Roy Sobelson. After graduating from the College of Law, he worked for an insurance defense firm for a year before joining King & Spalding, where he has been with the company for 20 years.

As a partner in the company’s product liability practice, Franklin focuses on high-profile product liability disputes, as well as business disputes and internal investigations. He is also the Diversity Chair at King & Spalding, where he advises the company on creating an inclusive environment and leads numerous initiatives, including a new mentoring program.

“Our profession has lagged behind many others and we are working to attract and retain diverse talent,” said Franklin. “Customers understand why diversity is important and expect it.”

In addition to mentoring and diversity & inclusion work, Franklin’s pro bono work over the past 20 years has focused on voting rights. He chairs the electoral protection in Georgia through the Lawyers’ Committee for Civil Rights Under Law, a non-partisan organization that works to prevent the disenfranchisement and repression of voters. He also worked with the late Congressman John Lewis on protecting voting rights.

“As a society we should all agree that it is not partisan to ensure that anyone who is eligible to vote and registered can vote and that their vote is counted,” Franklin said.

It’s this sense of duty that he instills in his mentees and that Georgia State Law has drilled into him. His younger brother is also a Georgia State Law graduate, and his 21-year-old son is studying for LSAT to follow in his father’s footsteps.

“The legal profession is a noble profession that has enabled me to make a broad impact in ways that I did not fully understand before I became a lawyer,” Franklin said.

SK hits a $ 1.eight billion settlement with LG that may...