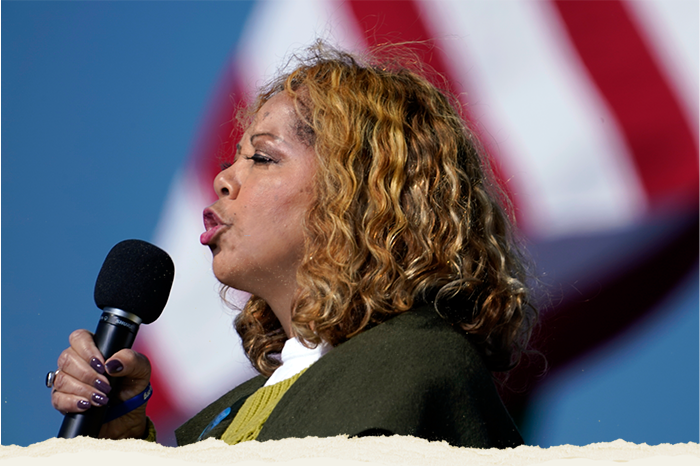 With help from Ella Creamer, Rishika Dugyala and Teresa Wiltz

What up Recast family! President Joe Biden says the U.S. would intervene militarily if China were to invade Taiwan, Pfizer and its German counterpart BioNTech say their three-dose vaccine regimen is 80 percent effective in young children. First, though, we kick things off with a look at the crown jewel of tonight’s primary election night: Georgia.

Few dates on the primary calendar have been as anticipated as today’s contests in the Peach State.

Former President Donald Trump will face the biggest primary test to date on Tuesday. He’s been the lead provocateur in the intraparty war he’s waging in contests against the sitting governor and secretary of state. His goal: to oust Republican incumbents who thwarted his plans to overturn the state’s 2020 election results.

There’s a civil war waging on the other side, too, meaning there will also be some political casualties for Democrats in this pivotal battleground state.

The closely watched contest for an Atlanta-area congressional district pits a pair of incumbents against each other, meaning one of them will not return to Congress next year — unless a lesser-known third Democrat somehow knocks off both of them.

They have similar records and each flipped Republican districts en route to their current seats. Freshman Rep. Carolyn Bourdeaux, the district’s incumbent, was part of that 2020 wave that turned Georgia Blue.

Carolyn Bourdeaux speaks during a news conference outside the U.S. Capitol on May 19, 2021. | Chip Somodevilla/Getty Images

She’s running against two Black women: state Rep. Donna McLeod and Rep. Lucy McBath. But really, this is a contest between Bourdeaux and McBath. McLeod doesn’t have the big-name backing and support from outside groups like her two opponents, while McBath, a gun control/racial justice activist who entered politics after her 17-year-old son was shot and killed by a white man, has the star power.

Much to the chagrin of party leaders, Bordeaux and McBath, two rising Democratic stars, are battling each other thanks to the GOP-controlled Legislature’s redrawn congressional map. In the process, McBath’s current 6th District turned deep red, going from supporting Biden by 11.3 points to backing Trump by 15.2 points.

Conversely, the nearby 7th District is redrawn to be an overly safe seat for Democrats, going from baby blue to cobalt: jumping by nearly 20 points, from 6.9 for Biden to 26.1 under the new maps.

All of this is political speak. The translation: McBath saw an easier path to victory in taking out a colleague rather than facing a GOP challenger in her own district. And that means it’s likely Georgia will lose a reliable liberal vote in Congress, says Brenda Lopez Romero, the Gwinnett County Democratic Party chair. (The 7th district is located mainly in Gwinnett County.)

As a result, Lopez Romero says, there’s “this sourness about the situation.”

Her county is growing, both in political stature and in diversity — making it a key spot for Democrats eager to notch statewide victories for Stacey Abrams, who is running for governor, and incumbent Sen. Raphael Warnock.

Stacey Abrams talks to the media after qualifying for the 2022 election on March 8 in Atlanta. | Brynn Anderson/AP Photo

“We really have become the political universe of the state because of our population and our ability to etch out more votes,” Lopez Romero says.

Heading into the primary election, McBath appears to be the candidate to beat.

She was first elected in 2018 and is widely seen as the frontrunner and the most progressive candidate in the race. In addition to having a higher national profile, she’s got the support of progressive titan Sen. Elizabeth Warren (D-Mass.) and earned the endorsement of the anti-gun violence group Everytown for Gun Safety over Bourdeaux (the group endorsed both when they were running in separate districts). And McBath also was favored by nearly 10 points over Bourdeaux in a February poll.

She’s also been the target of a negative mailer campaign that suggests when she switched districts, she relinquished her vote to a “radical anti-choice conservative.” The mailers were produced by Democrats Serve, a political action committee that advocates for Bourdeaux and other Democratic candidates with public service backgrounds. (It was shared with POLITICO via our Political Mailer Project.)

But while Bourdeaux has some big-name endorsements — including Andrew Young, former Atlanta mayor, U.S. representative and ambassador to the U.N. — she has some detractors, too.

She was criticized for siding with a group of centrists Democrats who pushed to unpair the bipartisan infrastructure bill from another bill, known as “Build Back Better,” aimed at climate and social safety net programs.

That move earned her a drubbing on social media — #ComeOnCarolyn — and may negatively impact her standing with a constituency that’s shifted to her left after redistricting. The new district is also majority minority — going from a 56.3 percent nonwhite population in 2020 to 66 percent today.

State Rep. James Beverly, the top Democrat in the Georgia House of Representatives, says he’s not thrilled about either Democrat losing reelection. But, he says, he’s focusing on two things: how many people vote in the primary and who shows up to vote.

“I think it will be a bellwether for what the state looks like in November, based on who shows up in the turnout,” Beverly tells The Recast. “If you have a Latinx, AAPI, African American turn out in that 7th, … boy, it’s going to be a great day for us [in November].”

Join me and our POLITICO colleagues breaking down this race and all the other marquee primary races tonight in our live chat beginning at 7:30 p.m. EDT.

All the best,
The Recast Team

Power dynamics are changing. With The Recast, you’ll get a twice-weekly breakdown of how race and identity are the DNA of American politics and policy.

Was this forwarded to you by a friend? Subscribe to the newsletter here.

AND IN OTHER POLITICAL NEWS …

It’s not just Georgia that’s hosting elections today. Alabama and Arkansas cast ballots in primary elections today and there are a few runoff races in Texas. Here’s a quick rundown of other races to watch:

Looking for more insights and analysis on today’s big races? Join me for a discussion where we talk up and break down how Tuesday’s contests impact the rest of the 2022 midterms. We get things started on Clubhouse, Wednesday at 5 p.m. EDT.

If Roe v. Wade is overturned, about half the states would make abortion illegal. But in one major respect, abortion has changed dramatically since 1973: the uptake of medication abortion, the two-drug regimen (mifepristone followed by misoprostol) that ends a pregnancy through 10 weeks with pills. In 2020, medication abortion accounted for 54 percent of all abortions.

Boxes of the drug mifepristone line a shelf at the West Alabama Women’s Center in Tuscaloosa, Ala., on Wednesday, March 16. | Allen G. Breed/AP Photo

The anti-abortion movement has prepared for this moment and is already focusing on restricting access to pills, knowing that abortion bans will be far less effective if states cannot keep the drugs from entering their borders, report legal experts Rachel Rebouché, Greer Donley and David S. Cohen for POLITICO magazine. Nineteen states do not allow medication abortion via telehealth, others prohibit sending pills through the mail, and some states are introducing legislation that would ban the drugs entirely. But enforcing those laws will be uncharted territory, with new avenues for evading state bans as well as new legal challenges about whether federal or state law reigns supreme in some instances.

What will anti-abortion states do to restrict access to abortion pills, and what will abortion-supportive states, patients and health care providers do in response to those restrictions? There are four battles over pills on the horizon.

First, the FDA could face increasing pressure to remove or to keep existing restrictions on the first drug in a medication abortion, mifepristone. Second, there are questions about whether the FDA’s regulation of medication abortion trumps state abortions laws, potentially expanding medication abortion access even in states that attempt to ban all abortion.

If all had gone according to the Biden administration’s plan, the Trump-era pandemic health order, known as Title 42, would have been lifted yesterday.

But on Friday, a federal judge in Louisiana blocked that move. So the federal government will continue quickly expelling migrants, including those seeking asylum in the United States, on the premise of protecting the American public from the further spread of Covid.

As POLITICO’s Krista Mahr points out, the public health law has been used by both the Biden and Trump administrations as a “ de facto immigration control mechanism” with more than 1.7 million expulsions since Title 42 was enacted in March 2020.

It may also explain attitudes toward future U.S. immigration policy when broken down by party affiliation.

Why are so few Latinos being elected in Georgia? – POLITICO’s intrepid Sabrina Rodriguez found that while more than a million Latinos call the state home, the number running for the state legislative, statewide and federal offices is around 10.

A Democrat Endeared by Conservative Media – When liberal-leaning Los Angeles County elected Sheriff Alex Villanueva in 2018, it was a huge victory for Democrats. But as POLITICO’s Alexander Nieves and Lara Korte report, the party now has buyers’ remorse.

Biden’s Strait Messaging – While in Tokyo on Monday, President Biden said the U.S. would defend Taiwan militarily. As POLITICO’s Phelim Kine explains, some experts say Biden’s comments “may encourage rather than deter Chinese aggression against Taiwan.”

In “Neruda on the Park,” Cleyvis Natera explores belonging and family relationships in the context of an ever-gentrifying New York City.

If you enjoyed “The Death of Vivek Oji,” check out Akwaeke Emezi’s newest novel, “You Made a Fool of Death With Your Beauty,” released today.

Chun Wai Chan has been promoted to principal dancer at the New York City Ballet, the first Chinese dancer to win that honor.

The 1971 feature-length documentary “The Murder of Fred Hampton,” chronicling the last year of the Black Panther Party deputy chair’s life, airs on TCM Wednesday at 6.30 p.m.

Panamanian singer Sech brings us a night to remember in “Noche de Teteo.”