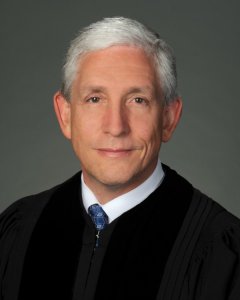 Georgia Supreme Court Justice David Nahmias, center, was elected the next chief justice of the state’s highest court on Thursday. In January 2020, Nahmias laughed during a reception at the public debut of the New House of Justice at the Nathan Deal Judicial Center. Stanley Dunlap / Georgia recorder

The Georgia Supreme Court on Thursday elected David Nahmias as the new Chief Justice to head the state’s highest court for the next four years.

The other justices unanimously elected Presiding Judge Nahmias to take office on July 1, when Chief Justice Harold Melton resigned after 16 years in court. Melton announced in February he would be leaving with about a year in his tenure to spend more time with his family and plan what he would do next.

Nahmias will oversee the state’s legal department as chief judge, serve as spokesman for the court and lead the deliberations on cases that make it to the Supreme Court. He will also take responsibility for helping Georgia’s judicial system recover from the upheaval caused by a pandemic.

Nahmias was appointed to the Supreme Court by Republican Governor Sonny Perdue in 2009 after serving as a US attorney for the Northern District of Georgia and the US Department of Justice.

As a federal attorney in Atlanta, he worked on the Centennial Park Olympic bombings and other high profile cases.

“I am honored that my colleagues have given me the opportunity to lead our court and our state’s excellent judiciary as we face the challenges of the COVID-19 pandemic,” the DeKalb County native said in a statement. “Chief Justice Melton left big shoes to fill, and I thank him for his exceptional guidance and service.”

The judges also voted Thursday to appoint Judge Michael Boggs as the new presiding judge, who will serve as chief judge in her absence.

Boggs was appointed to the Supreme Court by Governor Nathan Deal in 2016 and brought back to the bank by voters in 2018. He is a former judge on the Georgia Court of Appeals and a former Supreme Court Justice of the Waycross Judicial Circuit.

Georgia Supreme Court Justice David Nahmias was elected the next chief justice of the state’s highest court on Thursday.

Melton said Boggs and Nahmias are ready to move into their new leadership roles with a wealth of experience, including other supervisory positions with the Supreme Court.

“They believe in the rule of law and that the rule of law applies generally,” Melton said. “They both have different skills, but together they’ll make a pretty strong team and provide strong leadership to the judiciary across the state.”

Earlier this week, Melton picked up the Legal Process Restrictions He issued an emergency warrant last year as the COVID-19 pandemic spread, leaving court administrators to reopen their courtrooms if they can follow health and safety guidelines.

Nahmias and Boggs were part of an in-house COVID-19 team that worked through all of the scenarios to deal with the new world where courts will operate for the foreseeable future, Melton said.

“It may just be trench warfare to be together in this COVID crisis, but our judiciary has really come together into a pretty cohesive entity,” Melton said. “It takes someone inside to explain how unlikely that would be because it’s hard to describe how many moving parts there are and how there really is no authority to control anything. Everything happens through cooperation and agreement. “

Governor Brian Kemp will appoint a new judiciary to fill the remaining year plus for Melton’s tenure.

How a liberal lawyer in Georgia made an excessive proper flip

Georgia removes over 100,000 names from the electoral roll