The anniversary plans come as a UGA committee — like many universities, businesses, civic organizations and government agencies across the nation — explores ways to better celebrate diversity and be more inclusive. UGA has faced criticism in recent years from some students and community leaders for various race-related matters, such as its handling of a slave burial site found on campus in 2015 and recently, its response to discrimination complaints.

The university has worked to offer more scholarships to low-income students while highlighting the achievements of several African American graduates in its ongoing online Georgia Groundbreakers series of articles, the latest edition released last week about Shirley Mathis McBay, who in 1966 became its first African American to earn a Ph.D.

“I’m happy that it’s happening at a time that I think we all need to be reminded of our history,” Hunter-Gault, 78, said in an interview last week.

January 9, 20201 Athens – Ken Dious was among 8 people who rang the Chapel Bell to honor the 60th anniversary of desegregation of the University of Georgia outside the UGA Chapel on the campus in Athens on Saturday, January 9, 2021. On January 9, 1961, two courageous students, Hamilton Holmes and Charlayne Hunter, took heroic steps on the University of GeorgiaÕs campus to enroll as students followed by Mary Frances Early, who entered graduate school that summer. Their legacies continue as they have contributed a lifetime of public service to their communities. Because of these students, the university now boasts a diverse campus made of numerous nationalities, races and ethnicities. (Hyosub Shin / Hyosub.Shin@ajc.com)

ExploreCharlayne Hunter-Gault reflects on her past, present, future UGA ties

UGA, the first educational system in America operated by the state, was founded in 1785. But it was one of the last flagship universities in the South to admit Black students.

The first attempt to desegregate came shortly after the end of the Civil War. A group of Black residents demanded the university admit their sons. Then-Chancellor Patrick Hues Mell told the group, according to university archives, “this is a white man’s college and you are perfectly powerless to help yourselves.”

Nearly a century later, university leaders came up with technical reasons to deny admission to Black students. One Black applicant, Ida Rose McCree, was denied admission in 1960 because she was told the women’s dormitory was full. Her $25 application fee was returned. 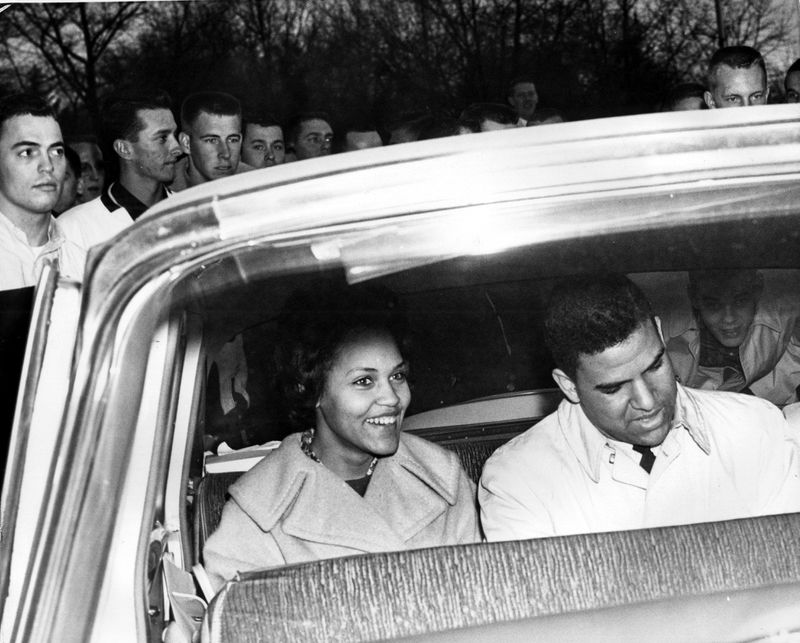 (Jan. 10, 1961) Athens, Ga.: – Charlayne Hunter and Hamilton Holmes have just entered their auto as they leave the University of Georgia campus after a trying day. They have completed all need qualifications for their entrance at the University of Georgia. Students stand around their car as the two smile with joy.
MANDATORY CREDIT: CHARLES PUGH / THE ATLANTA JOURNAL-CONSTITUTION

Holmes and Hunter (she married after graduating from UGA), both from Atlanta, were recruited by community leaders to attend Georgia SHom University, but Holmes had a different idea.

They applied, but faced with nearly identical explanations from UGA administrators rejecting their enrollment.

UGA said Holmes’ application was incomplete because he didn’t participate in a personal interview although he did. He was asked if he ever visited a house of prostitution, if he attended interracial parties and why didn’t he apply to Emory’s medical school since it’s in Atlanta. Hunter was told there was no room in the female dorm.

The two Black students sued. Their case came before Judge Bootle, a federal jurist from Macon.

Bootle, in his Jan. 6, 1961, ruling, found UGA had some vacancies in their women’s dorms, despite what it told Hunter, and admitted some white female students after denying her admission. Holmes’ interview, the judge wrote, was conducted “with the purpose in mind of finding a basis of rejecting” him.

Bootle wrote “although there is no written policy or rule excluding Negroes, including plaintiffs, from admission to the University on an account of their race, there is a tacit policy to that effect.”

UGA must admit the two students.

‘I will fear no evil’

Holmes and Hunter arrived in Athens the following Wednesday for the first day of the new semester. That evening, about 1,000 students and others rioted outside her dorm, tossing bricks, bottles and firecrackers at her window. Charlayne Hunter is escorted from the Univeristy of Georgia campus as a safety precaution, as students violently protest against integration on Jan. 12, 1961. Dean Tate (L) assists her to a highway patrol car for the drive back to Atlanta. (Bill Young / AJC Archive at GSU Library AJCP551-061i)

Hunter-Gault, a preacher’s kid, said her faith helped strengthen her in the aftermath of the rioting.

“I wasn’t afraid,” she recalled. “Somewhere in the back of my mind came to the front of my mind, it had to have been that Bible verse my grandmother taught me ‘Yea, though I walk through the valley of the shadow of death, I will fear no evil.’ You just never know when some of these lessons are going to matter.”

Anger, meanwhile, mounted in Macon. FBI agents stayed at the Bootle home because of threats against him, the judge’s son, James, 81, recalled in a telephone interview last week. Judge Bootle died in 2005 at the age of 102.

One person called the home, alleging a bomb was placed underneath, and demanded to talk to the judge.

“The judge is asleep right now,” his wife told the caller, James said. “The house is built on a slab and there’s no way you can put a bomb under it.”

James Bootle, a retired pathologist, said his father believed in the law and “had the courage to do what needed to be done.”

James, a student at Davidson College near Charlotte in 1961, offered to come home and protect his family with his shotgun. No need, his mother said. The federal agents left about two weeks later. 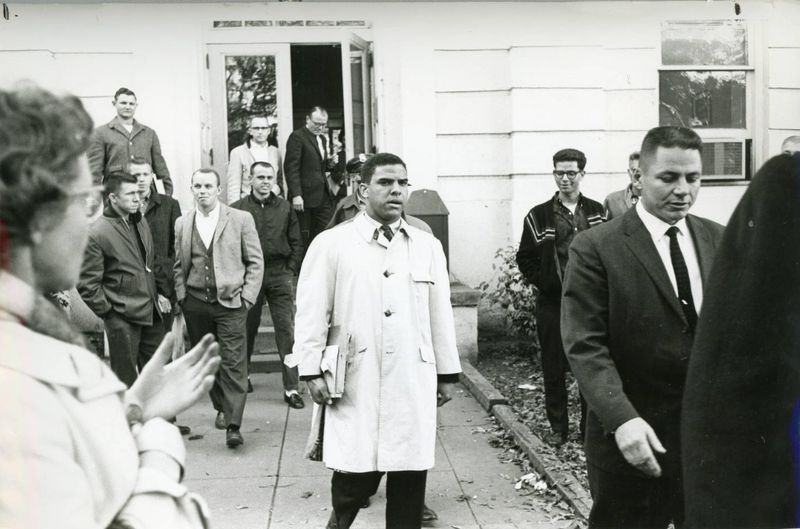 Hamilton Holmes, one of the first two African-American students to integrate the University of Georgia, leaving a campus building in Athens, Georgia Jan. 111961. White male students are shown in the background. (Bill You ng / AJC Archive at GSU Library AJCP426-125b)

Back in Athens, Holmes was taken in by the Killian family. The feeling was he wouldn’t be safe living on campus. Again, hollow threats and a shotgun became part of the story.

There were rumors the KKK was looking for Holmes. Archibald Killian, legend has it, was ready with a shotgun.

“I tell you one thing, it will be your last day,” Killian calmly said in a 2014 interview, conducted by the university, two years before he died. “I’m a veteran of foreign wars. It don’t mean a damn to me who I shoot or when. Now, come on down here.”

Miller, the first Black student to be offered admission as a first-year student, has a similar story of isolation. Like Holmes and Hunter-Gault, Miller attended Henry McNeal Turner High School in Atlanta. Jesse Hill Jr., the influential Black business leader, came to the school to recruit students interested in attending UGA. Miller applied, thinking back to her first visit to the fabulous Fox Theatre as a 10-year-old girl, which gave Miller her first lesson in segregation. 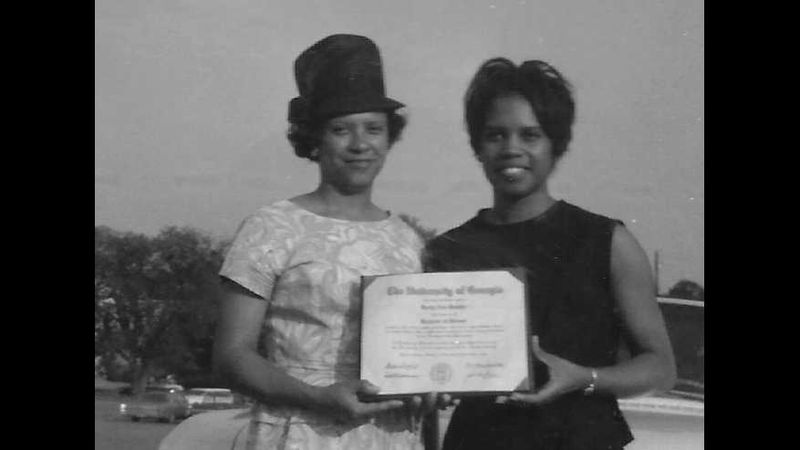 Kerry Rushin, right, held her diploma as she stood next to her mother, Annie Lee Rushin, after the 1966 commencement ceremony. She was one of the first Black students to graduate from the University of Georgia. FAMILY PHOTO.

Miller’s grandmother stopped her as she walked toward the ornate front entrance. Because they were Black, they had to walk up several rows of stairs to a side entrance and watched a movie from what she remembered was a smelly balcony.

For Miller, the reason for enrolling at UGA was her campaign for equality.

“Because I can go,” Miller, 76, who lives in Charlotte, said simply in a telephone interview.

She went to UGA and encountered discrimination. A student threw a rock at Miller that hit her in the hip. She and a Black classmate were booed because they didn’t stand when “Dixie” was played at a football game. One professor locked his classroom door to her.

Miller graduated on June 1, 1966. It wasn’t until 2017 when she returned for a ceremony organized by a Black student group that she felt welcomed by the university. During that visit to campus, Miller walked to the famed black arch on the north end of the campus, a structure she said she was told she could not walk under as a student. On that day, her husband took a picture of her under the arch. 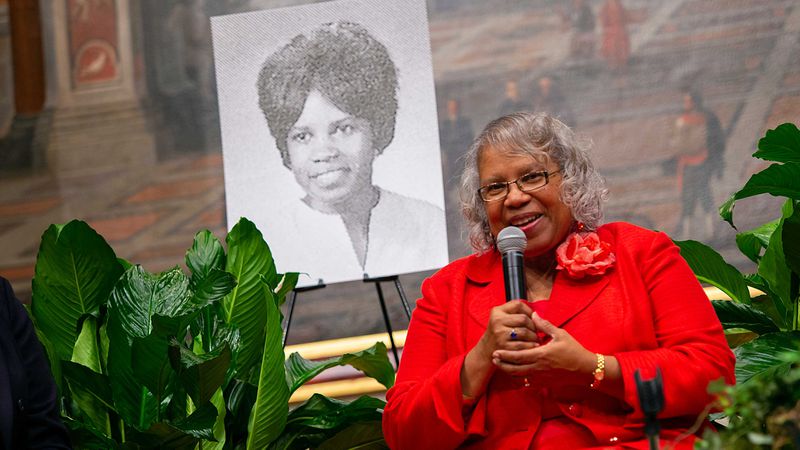 Kerry Rushin Miller, who enrolled at the University of Georgia in 1962, speaks during a 2017 ceremony “Conversations With The Class of 1966: UGA’s First Black Freshman Graduates” at the UGA Chapel. PHOTO CREDIT: Terence Rushin.

Holmes’ relationship with the university changed in the mid-1980s when university leaders asked if he would get involved with its foundation. He agreed. In 1986, Holmes Jr., an aspiring business student, enrolled there, with his father’s support.

James Bootle recalled meeting a group of Emory University medical school students in 1965 while interning at Grady Memorial Hospital. One student saw his name tag and asked if he was related to the judge. The student was Holmes, who told Bootle his father was “a fine man.” 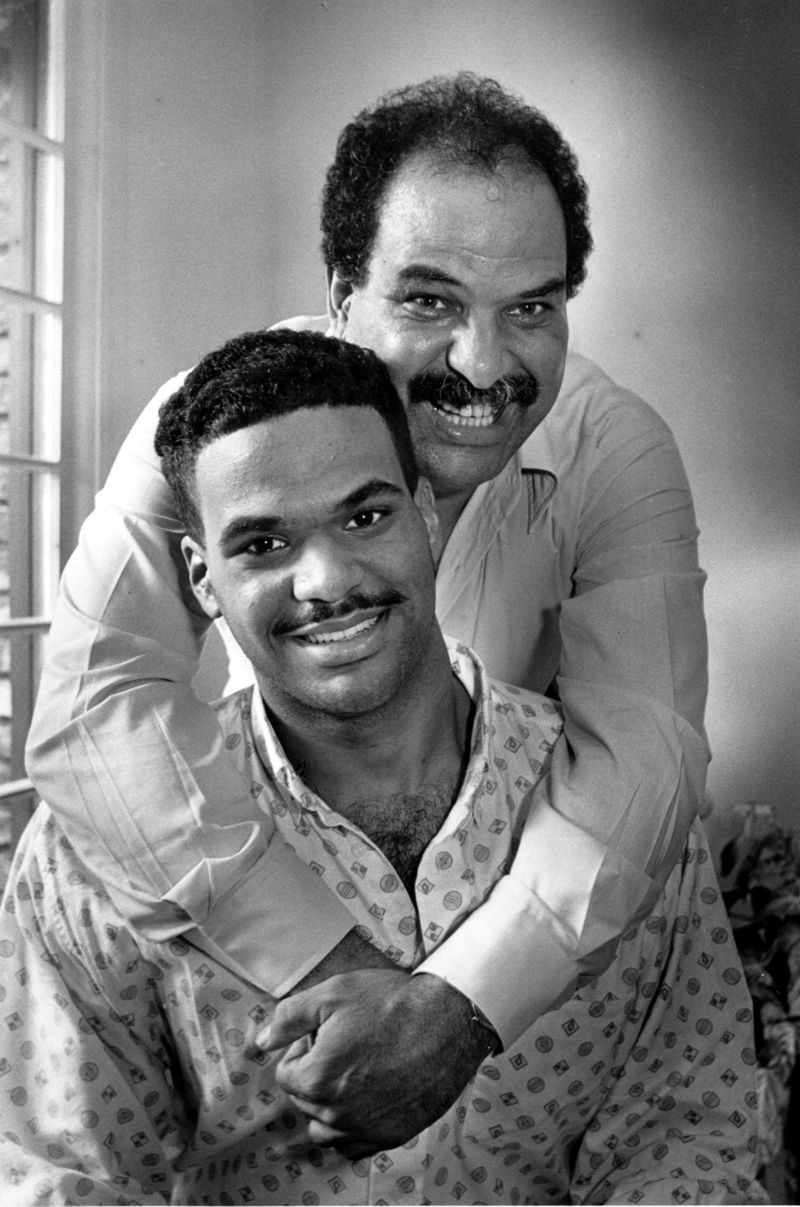 Hamilton Holmes Jr. and Sr. in 1986. The elder Holmes was one of the first black students to integrate the University of Georgia. His son started classes there on Sept. 22, 1986, some 25 years later. File photo.

“It was gratifying to hear him say that,” James Bootle said.

Holmes died in 1995. His son is amazed by his father’s impact on the university and Georgia.

“To think about him being recognized for that accomplishment is very rewarding for me, personally, and for our family,” Holmes Jr. said. 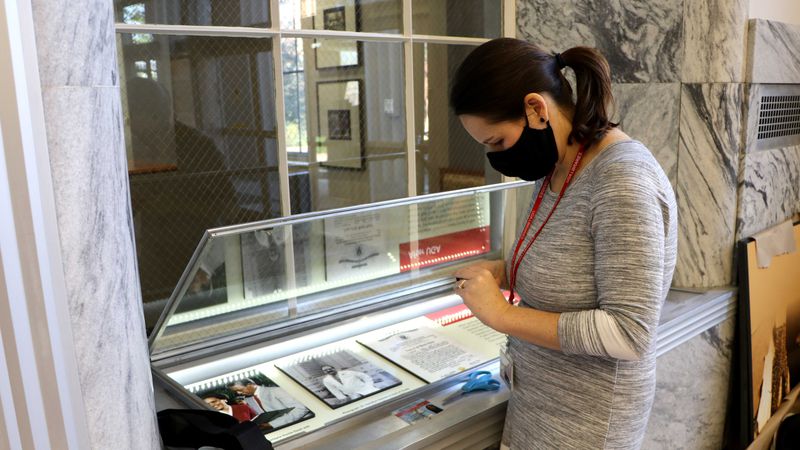 University of Georgia Special Collections Libraries archivist Jan Hebbard prepares graphics for display in an exhibit that will be part of a series of events to commemorate the 60th anniversary of its desegregation. (Courtesy of University of Georgia)

“I’m just happy that this causes a look at our history and what it means, not just to Georgians, but to young people and to older people as well,” she said.

She believes Holmes will be watching with a smile.

Here is a breakdown of African American representation currently at the University of Georgia:

8.3 — the percentage of Black students on campus

5 — the percentage of Black faculty members

6 — the percentage of Black administrators

12.7 — the percentage of Black full-time employees

The Georgia jury is contemplating whether or not Trump illegally interfered...