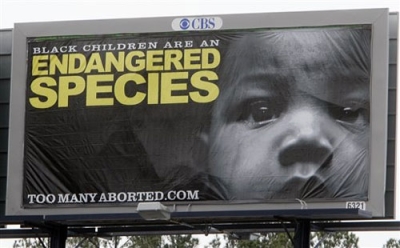 An anti-abortion billboard in Atlanta can be seen in this photo taken on Thursday, February 11, 2010. The eyebrow-raising ads featuring a small black child are an attempt by the anti-abortion movement to use race to rally support within the black community. Response from black leaders has been mixed, but the Too Many Aborted campaign, so far unique in Georgia, is finding support from other anti-abortion groups across the country. | (Photo: AP Images / John Bazemore)

A Georgia Superior Court judge has claimed that the Dobbs decision was not issued as early as June. Judge Robert CI McBurney overturned the state’s heartbeat statute, falsely claiming it was “unconstitutional.” Apparently, he missed the Supreme Court’s historic decision: “The Constitution does not grant a right to an abortion.” ACLU, NARAL, Planned Parenthood, and Planned Parenthood-funded minority abortion groups like SisterSong and SisterLove are all giddy about allowing abortions again (mostly ) can kill black lives.

The so-called Reproductive Justice movement celebrates the elimination of the most marginalized. Sixty-seven percent of the state’s abortions are performed by the black community. Abortion rates are 5.5 times higher among black women than among white women. In terms of both total numbers and abortion rates, the black community is the only demographic in the Peach State to experience a drastic increase in abortion violence year over year.

This has long been eugenic design.

The abortion industry relentlessly targets black people. Planned Parenthood, born out of racism and elitism, has always tried to control the black population. Initially, this was done through birth control, and eventually this effort morphed into unlimited on-demand abortions.

My organization, The Radiance Foundation, entered the fray in 2010 when we launched the first public ad campaign exposing the devastating effects of abortion on the black community. Our TooManyAborted.com poster campaigns went viral and received massive media coverage. The New York Times, the LA Times, National Pro-Abortion Radio (NPR), the Associated Press, and almost every urban news outlet (with the exception of Jet Magazine) went out of their way to defend abortion. Minority-led groups that are declared insufficient are driven off and thrive. For years since our first public awareness efforts, abortions in Georgia began to decline from 31,315 abortions in 2010 to 26,612 in 2015. Tragically, those numbers have steadily increased since 2017 to a 30-year high of 34,988 killings in 2021. Abortion is tragic regardless of fair skin color, but the vast majority of these abortions are committed on black lives.

SisterSong, which has repeatedly failed to take down our billboards in Georgia and across the country, has received millions of dollars in grants from Planned Parenthood and the Ford Foundation. These organizations are two of the largest population control agencies in the world. Her bizarre, radically pro-abortion Trust Black Women initiative refused to trust pro-life black women who called out her deadly propaganda.

Leaders like Dr. Alveda King and Catherine Davis continue to lead the fight in Georgia against what Fannie Lou Hamer called “genocide.” Yes. That The same Fannie Lou Hamer that Planned Parenthood and reproductive justice groups constantly quote had absolutely no love for the abortion giant. The civil rights icon, who was a life-affirming adoptive mother, railed against abortion. In her speech, “America is a sick place, and man is on the critical list,” Fannie had some advice for those pushing death in communities already devastated: “If you’re going to have an abortion, do it for yourself [I’m] I’ll try to keep the kids.” Fannie didn’t mince words. She continued: “The methods of taking human lives, such as abortion, the pill, the ring, etc. amount to genocide. I believe legal abortion is legal murder and using pills and rings to prevent God’s will is a great sin.”

Imagine black-led groups demanding more slavery. This is the equivalent of what is happening today: Black-led abortion groups, funded by the leading killer of Black life, pretend exploitation is empowerment and elimination is equality. You cannot denounce alleged racism while standing in solidarity with actual and undeniably fatal racism. That didn’t stop SisterSong executive director Monica Simpson from making this mindless statement: “While we welcome the end of a ban steeped in white supremacy, it shouldn’t have existed in the first place.”

Planned Parenthood kills more black lives in two weeks than the KKK kills in a century. But sure, ending abortion is white supremacy. So is legislation stopping the commercialized killing of primarily black lives racist? Zero Black Deaths Is ‘Injustice’ But Nearly 24,000 Deaths In 2021 Is ‘Racial And Reproductive Justice’? The delusions run deep.

Apparently Simpson missed the memo in which hundreds of current and former Planned Parenthood employees denounced the past and present racism of the abortion chain and proclaimed: “Planned Parenthood was founded by a racist white woman. That’s a part of history that cannot be changed… We know that Planned Parenthood has a history and a present steeped in white supremacy, and we, the staff, are motivated to do the tough work that is required is to improve.”

The problem is not even white supremacy. It’s the superiority of sin, and it comes in every color. Unfortunately, abortion activists still cannot or do not want to see the bloodstained evidence all around them.

Abortion is slavery. Both industries refuse to recognize the humanity of certain groups of people. Both allowed persons who are considered “non-persons” to be forcibly treated as property.

Planned Parenthood President Alexis McGill Johnson tweeted her delight at the suspended law: “Georgia’s abortion ban has been declared UNENFORCEABLE. The enormity of this victory is worth celebrating. Please know we will continue to fight so that every person in Georgia can receive the care they deserve without fear of prosecution or harm.” No woman will be prosecuted for the ban. Not surprisingly, this is a common scare tactic by abortion activists. Interestingly, the (temporarily) repealed law is actually called The Living Infants Fairness and Equality Act (or The LIFE Act). The landmark bill states, “It shall be the policy of the State of Georgia to recognize unborn children as natural persons.”

This is terrifying to those who refuse to believe that we are all created equal. Personality is anathema to those who fundamentally deny that every human being is a person and that every person is a human being. Both mothers and their unborn children are exploited and harmed by abortion and billion-dollar Planned Parenthood. But the cure may be just moments away. Luckily, the verdict has been appealed to the Georgia Supreme Court, which hopefully will rule it rightly. Every human life is worth protecting.

Ryan Bomberger is Chief Creative Officer and co-founder of the Radiance Foundation. He is happily married to his best friend, Bethany, who is CEO of Radiance. They are adoptive parents with four amazing children. Ryan is an Emmy Award-winning creative professional, activist, international speaker and author of NOT EQUAL: CIVIL RIGHTS GONE WRONG. He loves to illuminate that every human life has a purpose.

Join thousands of others to get the FREE MAIL free newsletter sent twice a week by The Christian Post.